A year ago today we released WooCommerce Zapier version 2, which was a major release that introduced two-way capabilities (including create and update actions as well as searches), simplified Zap creation, 3x the number of trigger events, and support for WooCommerce Products and Coupons.

I’m happy to say that version 2 has been a huge success, with hundreds of happy customers reaching out to let us know that they love the new features and capabilities.

We’re proud to have a 4.6 (out of 5) star rating on WooCommerce.com, receiving 13 new reviews since version 2 launched a year ago. 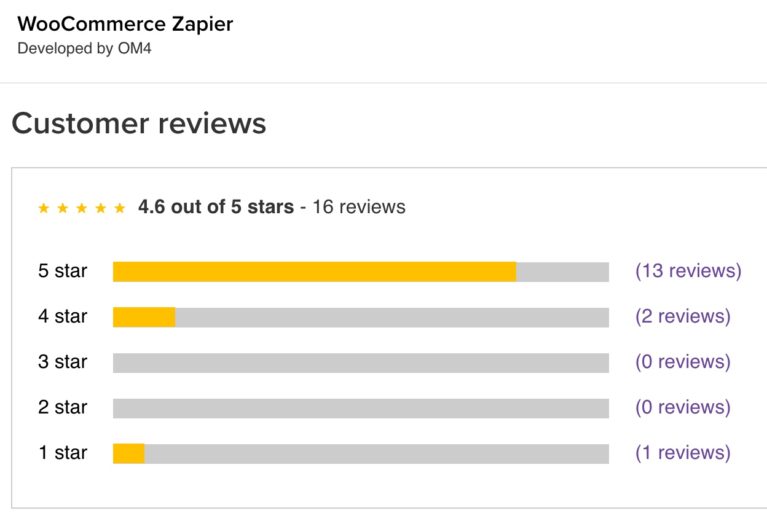 WooCommerce Zapier Reviews: 4.6 out of 5 stars

We’ve seen phenomenal growth in the last year as well, with the number of active WooCommerce Zapier subscribers/users exceeding 10,000 in February of this year (which is a 72% increase in twelve months).

The year has certainly been a challenge while we worked directly with thousands of our users to help them take the important and necessary steps to migrate their existing Zaps to version 2.

We’re pleased to say that majority of our users are now running version 2, and I’d like to thank every one of you for patiently completing the migration steps during what was a very difficult year in most corners of the world.

Since v2 launched, we have released 8 new WooCommerce Zapier plugin updates, as well as 7 releases of the WooCommerce app on Zapier.com. In those 15 releases, we have introduced some new functionality, performance improvements and also some vital bug fixes and refinements.

WooCommerce Zapier remained compatible with the 11 major WooCommerce core releases that occurred in the last year.

The Zapier.com ecosystem itself has also seen great growth, with more than 3,000+ apps on Zapier (a 50% increase in twelve months).

Our user base continues to grow, and we’ve got some great new features in the works, including adding support for WooCommerce Bookings.

If you haven’t yet upgraded to version 2, please follow our instructions on how to upgrade and migrate your existing Zaps.

If you’re happily using WooCommerce Zapier, we’d appreciate it if you leave us a review on WooCommerce.com.

If you have an idea for a new feature or improvement, please check out the WooCommerce Ideas Board for WooCommerce Zapier and post your idea there.

If you need any help, please be sure to contact us – we’re happy to help!